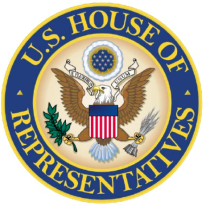 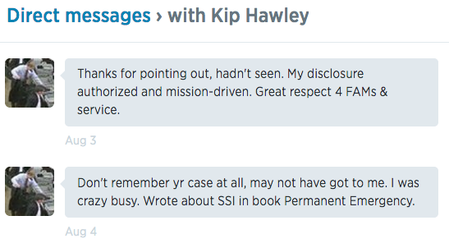 The former TSA Director of the Office of Sensitive Security Information ("SSI"), Andrew Colsky, provided some shocking testimony to the U.S. House of Representatives Oversight & Government Reform Committee ("the Oversight Committee"). His testimony is summarized in its May 29, 2014 bipartisan "Joint Staff Report." He gave Congress a complaint he emailed to eight TSA attorneys that he was "very uncomfortable" about sworn testimony he gave in order to support MacLean's termination and that he does not "know what to honestly call SSI anymore." He testified to Congress that his office was under "extreme pressure" to mark "embarrassing information...that was not by any stretch of the imagination at all SSI."

Former SSI Director Colsky was the official who issued the August 31, 2006 "Final Order on SSI" that retroactively designated Robert MacLean's July 2003 disclosure as SSI, a controlled unclassified information label governed by TSA regulations. MacLean was fired for the SINGLE CHARGE of "Unauthorized Disclosure of SSI" approved by Colsky.

At the last second, Colsky was mysteriously forced by TSA headquarters to testify in place of the official who was the SSI Director when MacLean made his July 2003 disclosure, David Graceson. This was in violation of a U.S. Merit Systems Protection ("MSPB") Administrative Judge's subpoena and third final order. The MSPB judge ordered former SSI Director Graceson to testify because he had the best knowledge of SSI regulations and training in effect at the time MacLean made his disclosure. Colsky was an attorney for the U.S. Postal Service when MacLean made his disclosure. Prior to violating the MSPB judge's order by switching out Graceson for Colsky, the MSPB judge DENIED THREE MOTIONS (motion to quash subpoena, motion to reconsider quashing a subpoena, and finally, a motion for "interlocutory appeal" to the full three-member MSPB in Washington DC) by the TSA to prevent MacLean's attorney from questioning David Graceson. After Graceson did not show up for his court-ordered deposition, MacLean complained to the U.S. Court of Appeals for the Ninth Circuit in San Francisco protesting the TSA's contempt of the MSPB judge's final order.

The MSPB judge who replaced the judge who ordered Graceson's testimony and being deceived by TSA lawyers, Franklin M. Kang, denied MacLean's request to have Colsky and Graceson appear at MacLean's November 5, 2009 MSPB hearing.

The TSA was never held accountable for violating the MSPB's order to allow MacLean to depose Graceson. Graceson was in charge of all SSI programs and training when MacLean made his disclosure in July 2003.

The TSA omitted a key piece of evidence canceling out MacLean's "good faith belief the information did not qualify as 'sensitive security information'" defense the U.S. Court of Appeals for the Ninth Circuit afforded him in its September 16, 2014 precedential decision.

On PAGE 17, the Oversight Committee identifies MacLean as a "whistleblower" who stopped a plan the TSA never implemented and admitted to being "a mistake." The Oversight Committee also describes Mr. Colsky's SSI order in MacLean's case as "retroactive." It's extremely rare for an entire congressional committee to identify a federal employee a whistleblower absent an MSPB or federal appeals court decision declaring his actions were protected. The U.S. Court of Appeals for the Federal Circuit only ordered the MSPB to conduct a new hearing to determine whether or not MacLean is a whistleblower.

Right after its narrative identifying MacLean a "whistleblower," the Oversight Committee attached an email (PAGE 18) then-TSA's then-Senior Executive/attorney/SSI Director Colsky sent to eight TSA lawyers one year and nine months AFTER one of MacLean's lawyers deposed him. His email was after former TSA Administrator (the #1 TSA executive) Edmund "Kip" Hawley kept bypassing the Office of SSI in order to PUBLICLY disclose information about specific air marshal deployments. TSA Administrator Hawley was in office when MacLean was investigated and fired.

In a televised October 16, 2007 public hearing, the U.S. House of Representatives Committee on Homeland Security specifically asked Kip Hawley about Robert MacLean. Kip Hawley stated he never heard of MacLean, but immediately protested that whistleblowers cannot publicly release "CLASSIFIED INFORMATION." SSI is a "controlled UN-classified information" marking that any TSA employee can apply. Mr. Hawley promised to get back with the Homeland Security Committee about MacLean, but never did. In an August 4, 2014 Twitter.com "Direct message" from Hawley to MacLean, he stated that he doesn't remember MacLean's case at all:

In his June 20, 2008 email to eight TSA lawyers, former SSI Director Colsky references his deposition by MacLean's attorneys. There were no other air marshals fired between the time MacLean was fired and when Colsky—clearly alarmed—sent this email, PAGE 18:

The Associated Press would publish a May 10, 2007 article about MacLean's case citing the reporter's conversation with Mr. Colsky:

Colsky would write his June 20, 2008 email three months before the U.S. Court of Appeals for the Ninth Circuit issued its September 16, 2008 decision stating:

Some of the oral testimony Mr. Colsky gave the Oversight Committee, PAGE 12: