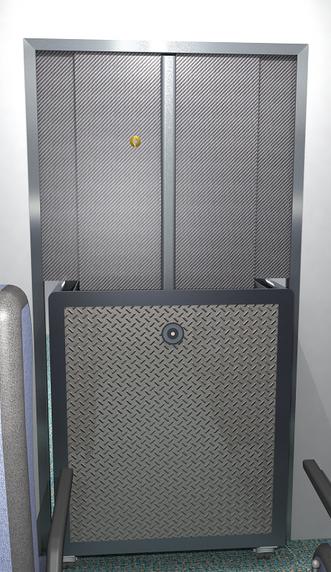 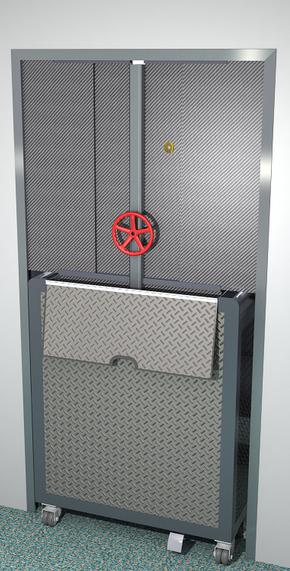 1) minimally invasive to aircraft cabins which significantly minimizes times and costs of the installation of material; reduced to a fraction of what built-in gates would cost and causing retrofit downtime; its 7 cubic-feet would replace a drink-cart with generally unsold meals and alcohol beverages⁠—recent article about passengers refusing airline meals to avoid food poisoning:
https://www.nbcnews.com/health/health-news/mile-high-ugh-what-you-should-know-you-eat-airplane-n1060461

2) one-person removal/replacement for routine and unscheduled maintenance to avoid any late departures, aircraft downtime, and revenue loss; like a car’s spare tire—a spare modular barrier is strapped inside the cargo wall or ceiling:

<<< “[Built-in] TVs can cost $10,000 per seat, estimated Dan McKone, managing director and head of the travel and transportation practice at the consulting firm L.E.K.”
. . .
“[Removal of the built-in TVs would] reduce the expense associated with maintaining that equipment.”

American and United Airlines are phasing out screens on new short-haul aircraft in favor of content offerings that passengers can stream from their personal devices. >>>
https://www.nytimes.com/2018/01/01/business/airlines-travel-entertainment.html

3) a system that will not impede potential emergency egress; the Safran company’s permanently closed A330 gates can mechanically or electrically (electrical locking-switch outside galley in the cabin) jam-shut after a hard-landing forcing pilots to egress out the small windshield opening subjecting them to a broken back or neck, smoke inhalation, and/or fire:
https://docs.google.com/document/d/1Ye0xhUlqPmF7IN4OEO9Wq-zGlUSNKzInuPdt8QPftAE

Aircraft cabin companies are now lobbying to have these Safran gates installed between the main cabin and the forward aircraft exit—this would force passengers to egress toward the back of the aircraft and expose them to smoke inhalation and/or fire.

4) secured from inflight sabotage because it’s stowed inside a faux drink-cart, locked inside a drink-cart slot, and locked with a tamper-circuit alarm; for hours, the A330 gates are exposed to the main cabin and can be sabotaged by a bad-actor flying out of the U.S. who can notify a second bad-actor to attack going back to the U.S. from a foreign country that does not have a contractor to repair the broken gate.

With a small metal tool, magnets, beeswax, or super-glue, the A330 gate’s electrical locking mechanism can be temporarily or permanently disabled.

5) strong enough to hold off a personnel/trolley cart attack for at least 5 seconds—the requirement established in the heavily redacted unpublished 2011 Radio Technical Commission on Aeronautics report (No. RTCA DO-329).

8) has 3 redundancies in case a passenger tries to defeat the modular barrier:

a) glass peep-hole for flight attendants

b) motion-sensor with alarm detecting passenger moving toward, and

White Paper requested by the U.S. Office of Special Counsel in response to its 5 U.S.C. § 1213 referral on behalf of Mr. MacLean:
https://whistleblower.org/wp-content/uploads/2019/12/MacLean-White-Paper-Rebuttal-to-TSA-Report.pdf

Latest on pending bill H.R. 911, it mandates barriers on all existing 7,300-plus aircrafts instead of just new ones now legally mandated by Section 336 of the FAA Reauthorization Act of 2018:
https://www.congress.gov/bill/116th-congress/house-bill/911/cosponsors?searchResultViewType=expanded

A recent article about the mandate (after October 5, 2019) for bullet-proof cockpit secondary barriers on only newly built aircrafts. Bill H.R. 911 would mandate them on all existing aircrafts due to the fact that over 7,300 are vulnerable. The inane law passed last year essentially broadcasted to all bad-actors to attack unlocked cockpits on old aircrafts:
https://www.fairwarning.org/2019/11/aviation-whistleblower-girds-for-battle/

<<< While in Karachi, [‘9/11 principal architect’ Khalid Sheikh Mohammed (KSM)] also discussed how to case flights in Southeast Asia. KSM told [the hijackers] to watch the [cockpit] doors at takeoff and landing, to observe whether the [pilots] went to the lavatory during the flight, and to note whether the flight attendants brought food into the cockpit. >>>

Since April 9, 2003, FAA regulations (14 CFR § 25.795) mandate that cockpits be bullet-proof. They’re not bullet-proof when pilots routinely open them to sleep, eat, or use the lavatory. Protection of unlocked cockpits should apply just like a submarine’s “trunk” (i.e., “air-lock”)—people inside are in danger when both doors are open.

<<< Flight deck [“cockpit”] Door Opening Procedures While InFlight
[ . . . ]
The only time the flight deck is potentially accessible during flight is when the door is opened. The three main reasons a door is opened during flight are for crew change outs, restroom break and meal service.
[ . . . ]
Repeated successful door operations and lack of nefarious breaches of the flight deck during flight operations since 9/11 could lead crews to be less attentive to their approved procedures.
[ . . . ]
Reinforced messaging on proper flight deck door security procedures is needed in light of continued passenger incidents in and around the cockpit door involving mistaking the flight deck door for the lavatory, intoxication incidents, or mental instability episodes. In addition, the anniversary of 9/11 serves as a good reminder that hostile actors present an ongoing safety and security risk to airline operations and these hostile actors may still pursue hijacking planning involving an attempt to gain unauthorized entry to the flight deck. >>>
https://www.faa.gov/other_visit/aviation_industry/airline_operators/airline_safety/info/all_infos/media/2019/InFO19010.pdf

ALPA publicly complains about the lack of cockpit secondary barriers despite law passed on October 5, 2018:
https://www.alpa.org/news-and-events/news-room/2019-10-09-alpa-blasts-faa-failure-to-implement-secondary-barriers

The U.S. Department of Transportation (DOT) hinted to The Wall Street Journal that the current secondary barrier systems do not meet cost-effectiveness and modern danger criteria and needs to further evaluate:

<<< The DOT says it expects recommendations from its [secondary barriers] committee to include technical specifications and cost-benefit analysis not done by [Radio Technical Commission on Aeronautics DO-329 study]. >>>
https://www.wsj.com/articles/a-deadline-passes-with-little-to-show-for-fliers-11570626455

In 2018, the GOP-majority Congress passed a band-aid law telling every suicidal-killer that 7,000 jets are vulnerable to 9/11-style attacks: rushing the cockpit when pilots unlock it in order to sleep, get food, or use the lavatory. (see page 158 of the 9/11 Commission Report describing the hijackers’ breach tactic on the four Boeing cockpit doors)

Last January, the president of the flight attendants union testified to Congress about the existing jets vulnerability caused by the 2018 half-baked law:

<<< We completely support secondary barriers in all of our aircraft. It’s an absurd practice to have flight attendants use their own bodies as the barrier between the cabin and the cockpit. >>>
https://www.theintell.com/opinion/20190217/editorial-commonsense-airline-cockpit-safety-act-still-faces-barriers

The 2018 law was only for NEW JETS because the airline lobby complained that built-in barriers would cost too much due to excessive retrofitting of the cabins. A modular barrier solves this problem being minimally invasive: just 2 D-rings and/or a V-channel for the forward galley/cabin entrance.

After President Bush believed that the Aviation Transportation and Security Act of 2001 fell short, he enacted his January 15, 2002 Executive Order mandating bullet-proof cockpits within 15 months—although no firearms weren’t used on 9/11:
https://www.federalregister.gov/documents/2002/01/15/02-965/security-considerations-in-the-design-of-the-flightdeck-on-transport-category-airplanes

<<< [Mohamed] Atta’s Roomate Outlines 9/11 Plot
[ . . . ]
Although [Al Qaeda planner Ramzi] Binalshibh hoped to be one of the four pilots leading last year’s attacks against America, he was unable to obtain a visa.
[ . . . ]
The hijackers fine-tuned their plan and determined that the best time to attack the cockpit was during the 15 minutes after takeoff.

According to Binalshibh, the hijackers divided into teams. “The group storming the cockpit is formed of two persons,” says Binalshibh.

“It would be the nearest group to the cockpit, in order to seize the opportunity when the door is opened and enter into it swiftly, take it over and slaughter those inside completely and then the brother pilot comes very quickly to assume the rest of the mission and guide the aircraft.” >>>
https://www.cbsnews.com/news/attas-roommate-outlines-9-11-plot/

<<< [The TSA spokesperson] identified powders including fentanyl ... “that could be used to irritate or harm aircraft passengers and aircrew if released during flight.” >>>
https://www.nytimes.com/2018/06/21/travel/tsa-powder-rules.html

United Airlines Capt. Ed Folsom was selected for the FAA’s October 2019 “Flightdeck Secondary Barrier Working Group”. He was also the Co-Chairperson of the 2011 RTCA DO-329 study that concluded expectant air marshals were unable to stop unlocked cockpit rush-attacks by role-player hijackers—unwilling to hurt or kill themselves. The air marshals always failed if the attack started within 40 feet of the door.

<<< How to Hijack an Airplane in 3 Seconds
[ . . . ]
“We’re in a race against time, frankly, because there is going to be another attack,” said Capt. Ed Folsom, a United Airlines pilot who has played an active role in the development of the secondary barrier system since 2002. “I’m no rocket scientist, so if I can see the vulnerability, so can everyone else.”
[ . . . ]
Folsom, a co-chairman of the [2011 RTCA DO-329] committee, said the group is currently working on a report that will outline minimum performance criteria, installation instructions, and other issues for secondary barriers.
[ . . . ]
What’s more, Folsom added that the drills, while grim, likely offer a best-case scenario. “We looked at some highly trained [expectant U.S. Federal Air Marshals] playing the role of flight attendants and crew members and even they couldn’t prevent a breach of the [cockpit against faux role-player hijackers unwilling to serious hurt or kill themselves],” Folsom said. “If they can’t do it, then little 57-year-old, 40 percent body fat Susie isn’t going to do it.”
[ . . . ]
In recent years, according to [2011 RTCA D-329 member and a commercial airline pilot and former president of the Coalition of Airline Pilots Associations Captain Paul] Onorato, the coalition has set up scenarios where a handful of would-be terrorists are seated in the first few rows of an airplane. These scenarios have shown that terrorists are able to “blow past” both a flight attendant and galley cart and get into the cockpit within three seconds.>>>
https://www.theatlantic.com/national/archive/2011/08/how-to-hijack-an-airplane-in-3-seconds/243631/

It is a regulatory mandate that cockpits be ram-proof and bullet-proof since April 9, 2003—4 (four) months before Mr. MacLean’s July 2003 disclosure:

<<< The bulkhead, door, and any other accessible boundary separating the flightcrew compartment from occupied areas must be designed to resist forcible intrusion by unauthorized persons and be capable of withstanding impacts of 300 joules (221.3-foot pounds)
[ . . . ]
to resist a constant 250 pound (1,113 Newtons) tensile load on accessible handholds, including the doorknob or handle.
[ . . . ]
to resist penetration by small arms fire and fragmentation devices to a level equivalent to level IIIa of the National Institute of Justice (NIJ) Standard 0101.04. >>>
https://www.ecfr.gov/cgi-bin/text-idx?SID=152175bec703287273a3c7350cd414fc&mc=true&node=se14.1.25_1795&rgn=div8