Violating all rules of ethics and possibly breaking the law, the TSA lawyers omitted this crucial piece of evidence to compel the FULL U.S. Merit Systems Protection Board ("MSPB") to cancel out TSA whistleblower Robert MacLean's "good faith belief" defense afforded to him by the U.S. Court of Appeals for the Ninth Circuit's September 16, 2008 decision — on PAGE 13006:

Ignoring MacLean's plea that his testimony was clearly taken out of context — despite THIRTEEN MONTHS of deliberations — MSPB members Susan T. Grundmann, Mary M. Rose, and Anne M. Wagner failed to review one of only nine exhibits submitted by the TSA and irresponsibly cancelled out his U.S. Court of Appeals for the Ninth Circuit "good faith belief" defense that his 2003 disclosure was not SSI. Further adding to this disaster, this Board failed to consider the fact that TSA violated three separate orders issued by one of its administrative judges to allow MacLean to cross-examine the former 2003 Office of SSI Director, David Graceson, and switch-out Graceson with a former 2003 Postal Service attorney, Andrew Colsky. Colsky joined the TSA after MacLean made his 2003 disclosure and the Postal Service does not use the SSI designation. Colsky eventually blew the whistle to Congress in 2014 which exonerated MacLean of not having a "good faith belief" that his 2003 disclosure was not SSI.
The U.S. Solicitor General was also deceived by the TSA lawyers and used its false evidence to argue in his brief to the Supreme Court that MacLean "intentionally" released SSI. It even ended up as the Supreme Court's "QUESTIONS PRESENTED."
See the page the TSA lawyers omitted in its MSPB exhibit here, and scroll down to see its entire motion with the one page at the end as its last exhibit. Even the follow-up question was about the MacLean/supervisor conversation regarding potential SSI:
TSA successfully and easily deceived all of the MSPB judges into believing MacLean testified that it "did not matter" to him that his disclosure to the MSNBC reporter, Brock Meeks, may have been Sensitive Security Information ("SSI"). SSI is an UN-classified secrecy designation used by the TSA. The missing page shows MacLean's "did not matter" response was directly to the TSA lawyer's question about his disclosure to a supervisory TSA Federal Air Marshal, "Mr. Scoffield" — not the reporter as the government attorneys are trying to get anyone to believe.
​Both the regional San Francisco MSPB administrative judge and the full MSPB Board in Washington DC clearly got deceived by the TSA lawyers' manipulation of the August 2, 2006 MacLean deposition transcript pages. Due to the TSA's misleading evidence taken out of context, the full MSPB Board unfortunately wrote this in its July 25, 2011 decision canceling out the Ninth Circuit's "lack of clarity...good faith belief" 2008 order, emphasis and brackets added — on PAGE 6:

Significantly, the administrative judge correctly found that the appellant demonstrated a lack of regret for disclosing the RON information, reflected, for example, in his deposition testimony to the effect that it did not matter to him if the information​ was confidential, law enforcement sensitive, SSI or classified information. 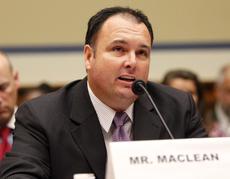 [MSPB administrative judge Franklin M. Kang noted in MacLean's] sworn deposition testim​ony that it did not matter to him whether or not the information conveyed to the reporter was SSI.